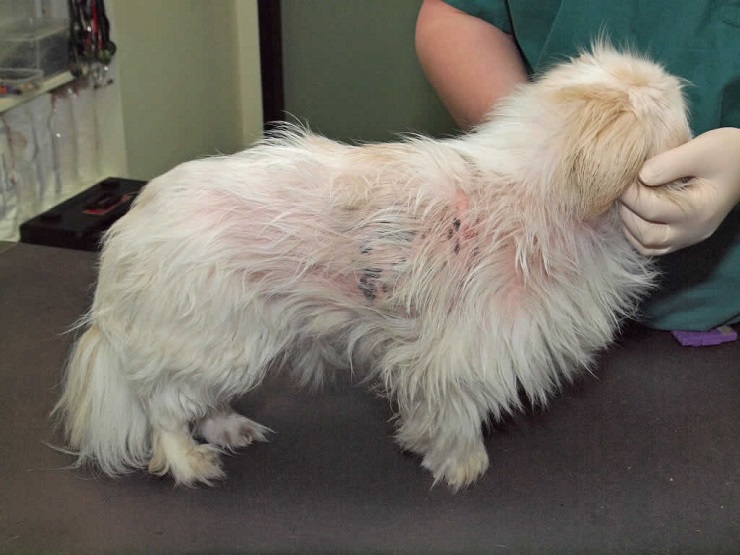 Is There Really A Treatment For Demodectic Mange?

Demodectic mange takes place when tiny mites causing it multiply beyond control. Of course it’s very disheartening for any dog lover to see his or her pet suffer from this. There are cases when the skin disease requires a treatment course by a vet. However, there are other cases when no drastic treatment is required.

Now the reason why these mites proliferate out of control and end up as demodectic mange is still unclear. You see, there are some dogs that may develop this skin disease, while the rest may not. When your dog develops this type of mange, chances are it will heal on its own. As your dog matures, so does its immune system. And it’s the immune system that significantly controls the multiplying of demodex mites.

Around 90 percent of all dogs that suffer from demodectic mange are nursed back into health naturally. This is because as they grow, their natural defenses also attain complete development. And it provides a lot of help in keeping the multiplication of the mites in check. Even without undergoing any form of management, the worsening of the skin disease is brought to an end.

Generally, demodectic mange can be classified into two forms. The first one is the localized form, and it’s common among dogs that are below 12 months of age. The most evident sign is thinning or loss of hair in the ears, around the eyes and mouth. Although the sign may also be observed in other body parts, but usually confined to where they are.

No treatment is done in the localized type. However, the pet owner may apply a medicated shampoo during bathing to help keep it under control. The veterinarian may prescribe some good-quality foods and nutritional supplements to enhance the dog’s immunity. This mange type vanishes on its own, usually around 8 months to 3 years of age. Depending on the dog’s breed, it’s usually during this time that the defense system of the body is fully developed.

The second one of this skin disease is the generalized kind. During onset, it may appear as though it’s simply the localized variant. But after some time, the patches of hairloss may spread to other parts of the body like the limb, tail and trunk. Other signs include skin inflammation and formation of scabs. For this, a lengthy management procedure may be given by the vet.

Oral drugs may be administered. There’s also a form of treatment where the dog is dipped in a chemical solution. However, such may cause some terrifying side effects, such as vomiting, loss of appetite and collapse. But even when cured, the skin disease may still return and make the dog suffer from it all over again. So in effect, there really is no cure for this mange type.

But even if the vet’s choice of managing demodectic mange proves to be effective, your pet will be advised to undergo spaying or neutering. The skin disease is linked to a problem in the immune system. An infected dog, even when cured, is likely to pass it on to its puppies eventually.

Things To Make Sure For Right Cat Grooming

Dog Vitamin use is on the Rise

Keep Your Pet Strong And Give Him The Right Dog Nutrition